Katherine Johnson, a trailblazing mathematician whose calculations were instrumental in every major NASA spaceflight program, celebrated her 100th birthday on August 26.

Johnson mapped the flight of Alan Shepard, who became the first American in space in 1961. And when John Glenn was preparing for his first orbital flight in 1962, he didn’t trust NASA’s new electronic computers. He requested that Johnson personally verify the math.

The 2016 Hollywood blockbuster Hidden Figures celebrates the massive contributions of Johnson and other African-American mathematicians and engineers at the Langley Research Center in Virginia.

Our nation’s space program wouldn’t be where it is today without the contributions of retired @NASA_Langley mathematician Katherine Johnson. Join me in wishing her a happy 100th birthday and learn about her legacy at https://t.co/wqTfXT18LX. #Happy100Katherine pic.twitter.com/DQ8xHi3Ifd

For Johnson’s achievements, she was awarded the Presidential Medal of Freedom in 2015. And in 2016, NASA dedicated the new Katherine G. Johnson Computational Research Facility at Langley Research Center in her honor.

Meet the woman who represents the United States in trade 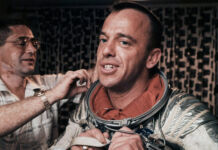 60 years ago, Alan Shepard became the first American in space 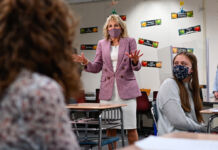 As U.S. students show appreciation for teachers, they can touch the White House