In North Korea, you can have radios and televisions, but they are pre-programmed to receive only official government stations. Computers and mobile phones are openly available too, but they cannot connect to a network outside the country.

Despite the risks of harsh imprisonment, forced labor and even execution, North Korea’s people are covertly working around their government’s efforts to control their media and entertainment options. Behind the scenes, those willing to pay can find radios that can be tuned, DVDs of South Korean and Western films, music CDs and MP3s, USB sticks and other portable media devices. And in many cases, prying officials can be bribed.

“The North Korean government cannot control all the people,” said Praise, a young defector who escaped to South Korea in 2011. The people’s thirst for information has given rise to what she calls “a black market generation.”

Hyeona Ji endured human trafficking, forced repatriation from China, prison, torture, a forced abortion and other tragedies. Her defection to South Korea was finally successful in 2002 after four failed attempts.

North Korea’s official state media paints “a rosy picture” of life inside the country, she said. But of the 2,000 people who were incarcerated with her in a North Korean re-education camp, only 200 survived. She said the dead were buried in shallow graves, and their bodies were torn apart by dogs.

Ji’s experiences led her to inform North Koreans and the world about what is happening inside the country. She has testified before a U.N. Commission of Inquiry and has written a book about her experiences. “Now I am a voice for the deceased. … I am no longer afraid,” she said.

North Korean defectors in South Korea offer the most effective and popular delivery of media and devices to North Korea, Ji said.

Praise said radio, which can run on batteries, was easiest for her family because her neighborhood in North Korea often lacked electricity.

“I have five family members,” she said. When she was 9, as part of a nightly ritual, “the whole family was under the blanket” listening to the Voice of America, Radio Free Asia, and broadcasts from China and South Korea.

The routine provided more than eavesdropping on the outside world. One night after Praise’s father defected, they heard his voice on South Korean radio and knew he was safe.

Praise especially loved James Bond movies and the film Charlie’s Angels. She would exchange media and discuss favorites with trusted friends and neighbors, which she called her “human Internet.”

Ji said South Korean movies and especially K-POP music are popular. But she wants North Koreans and the rest of the world to know the reality that stands in stark contrast to the official propaganda.

“People are living in a situation with gross human rights violations and experiences that no human being should be going through,” she said. 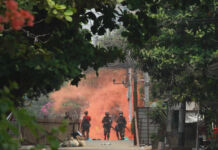