For decades, Marlin Steel Wire Products’ workers crafted every wire basket they made by hand. Today they operate high-tech machinery that automates the process. The shift has allowed Marlin Steel to make new products and boost sales eightfold since 1999.

“Automation is critical,” said Drew Greenblatt, Marlin Steel’s president. “The world demands high quality and precision.” He said manufacturers have learned that with the right tools, they can deliver goods that markets demand.

Marlin Steel is part of a shift in the U.S. toward smart manufacturing, which incorporates robotics and automation. Smart factories are innovating more and hiring more highly skilled employees.

“Innovation drives productivity. And the country has innovated dramatically, both by developing higher-value products to make and by creating more efficient manufacturing processes and techniques to make them,” said Justin Rose, a managing director at Boston Consulting Group, which studies the shifting economics of global manufacturing.

Over the past 30 years, manufacturing output in the U.S. has almost doubled, according to the U.S. Bureau of Labor Statistics. 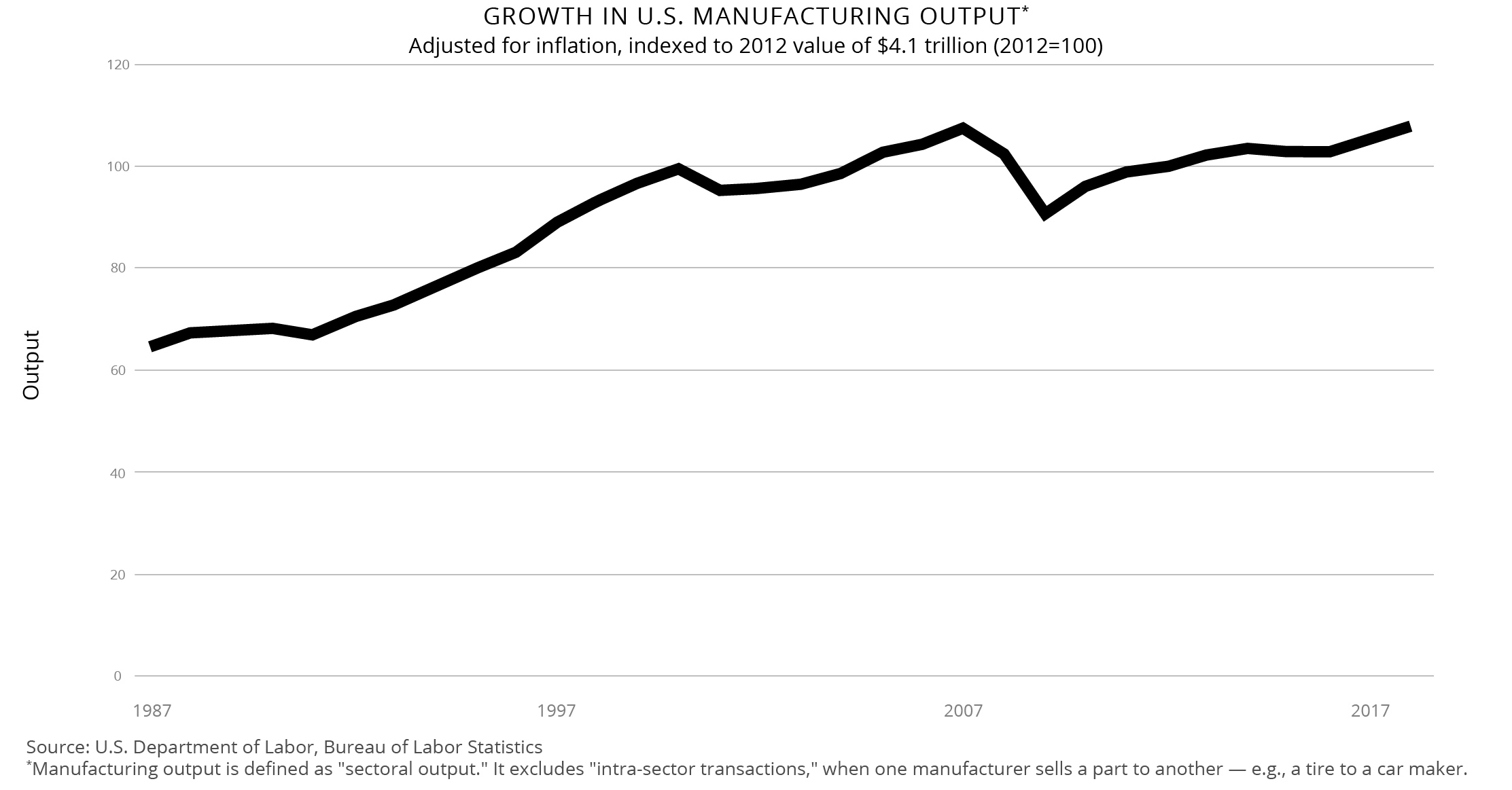 Greenblatt said that at Marlin Steel, advanced processes bend steel wires 25,000 times an hour, compared to 300 bends per hour when done by hand. Furthermore, the work is safe and extremely precise.

Marlin Steel employs workers who now spend more time designing products that can only be created with automation. “Twenty percent of our team are engineers [with college degrees] who provide novel innovations — five patents and counting,” Greenblatt said.

Lisa Strama, president of the National Center for Manufacturing Sciences, said that as more U.S. companies adopt smart manufacturing processes, output will only grow. “I see a lot of very innovative work that’s going on within the U.S. from a competitiveness perspective,” she said. “Industry, academia and government are partnering together and producing these technologies that push the boundaries.”

Jeff Burnstein, president of the Association for Advancing Automation, points out that the U.S. continues to lead the world in development of systems-integration tools, artificial intelligence, virtual reality and machine learning, all of which contribute to improvements in manufacturing.

“Most new facilities being built today in the U.S. are adopting some form of smart manufacturing technologies,” Burnstein said. “If we are going to compete, we’re going to have to adopt these technologies. More and more companies recognize that.”

Everything you need to know about carbon capture