The United States is sending tens of millions of dollars in lifesaving assistance to ease the plight of the Rohingya who have fled their homes in Burma.

Secretary of State Rex Tillerson has voiced extreme concern about the reported atrocities against the Muslim minority and called for an immediate end of the violence in northern Rakhine state. He urged the Burmese government to allow refugees to return home — voluntarily, safely and with dignity — and to give humanitarian organizations full access to the region.

In the past two months, 603,000 Rohingya have fled to neighboring Bangladesh, and an unknown number are homeless inside Rakhine state after more than 200 villages were burned.

“We really hold the military leadership accountable for what’s happening with the Rakhine area,” Tillerson said October 18. “The world can’t just stand idly by and be witness to the atrocities that are being reported.”

The United States, the world’s largest donor of humanitarian aid, has rushed nearly $40 million in emergency assistance since August 25 — and almost $104 million overall in fiscal 2017 — to help displaced Burmese, including Rohingya.

Working with the U.N. high commissioner for refugees and international aid agencies and partners, the U.S. Department of State is helping displaced Rohingya in Burma, Bangladesh and other countries where they have sought refuge, including Thailand and Malaysia.

Most Rohingya are Muslims in a country that is 90 percent Buddhist. They are not recognized as one of the country’s many ethnic minorities.

After a period of military rule, power in Burma is shared between civilian leaders and the military. After August 25 attacks by Rohingya militants against police posts and an army base in Rakhine state, the army went on a crackdown. 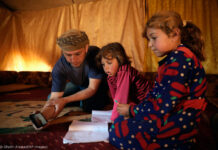